New publication: “Nothing works without the doctor:” Physicians’ perception of clinical decision-making and artificial intelligence

A new vALID article has been published in Frontiers in Medicine: “Nothing works without the doctor:” Physicians’ perception of clinical decision-making and artificial intelligence is the evaluation of a qualitative study of physicians’ attitudes regarding the use of new AI systems in clinical practice. The basis for this study is a qualitative content analysis of expert interviews with experienced nephrologists after testing an AI-DSS in a straightforward usage scenario. The results provide insights on the basics of clinical decision-making, expected challenges when using AI-DSS as well as a reflection on the test run. While the somewhat expectable demand for better explainability and control can be confirmed, other insights highlight the need to uphold classical strengths of the medical profession when using AI-DSS as well as the importance of broadening the view of AI-related challenges to the clinical environment, especially during treatment. The results stress the necessity for adjusting AI-DSS to shared decision-making. We conclude that explainability must be context-specific while fostering meaningful interaction with the systems available.

New publication: “Evaluation of a clinical decision support system for detection of patients at risk after kidney transplantation” 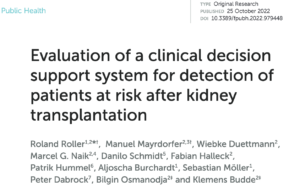 A new vALID article has been published in Frontiers in Public Health: In “Evaluation of a clinical decision support system for detection of patients at risk after kidney transplantation” Roland Roller et al. present the results of an experimental AI-driven decision support system intended to assist in the risk assessment of patients after kidney transplantation. The system tested is based on routine clinical data from around 1,500 patients and more than 100,000 data points and makes predictions for the risk of infection and graft loss in the next 90 days. Internal validation showed promising results. To compare the performance of nephrologists with and without the system, a reader study was performed: the physicians were asked to make predictions for the risk of rejection and graft loss in the next 90 days, first without and in a second part with the AI system’s recommendations. First, the reader study shows that physicians’ predictions align with those of the tested system. However, performance does not improve. 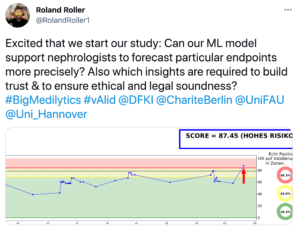 Die vALID project teams at the German Research Center for Artificial Intelligence (DFKI) and Charité Berlin have launched a set of empirical investigations, which form an integral part of vALID’s exploration of normative considerations around clinical AI-driven decision support systems. In the course of these investigations, clinicians and patients will be confronted with mock-up simulations of AI-driven decision support in nephrology. The vALID team is excited for the upcoming months of data gathering and analysis. 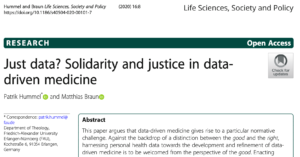 A new vALID article has been published in Life Sciences, Society and Policy. In “Just Data? Solidarity and justice in data-driven medicine”, Patrik Hummel and Matthias Braun argue that data- and algorithm-driven medicine is based on forms of solidarity, but at the same time can generate, perpetuate or amplify injustices for individuals and populations. In view of this tension, the authors propose to enable data subjects to more control over their data, and to extend the focus of governance on downstream effects of such technologies on individual freedom. 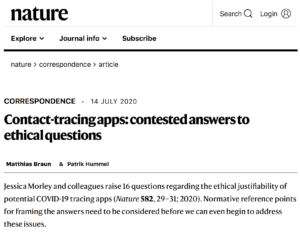 Matthias Braun and Patrik Hummel have published a correspondence in Nature. “Contact-tracing apps: contested answers to ethical questions” highlights ethical considerations and negotiation processes surrounding tracing-apps. While the commentary does not deal directly with AI, the considerations apply to a range of digital health applications and other technologies, and thus will be considered and examined in further in vALID.

A new vALID publication as appeared in Philosophy & Technology. In “Own Data? Ethical Reflections on Data Ownership”, Patrik Hummel, Matthias Braun and Peter Dabrock explore the notion of data ownership in the clinic and beyond. The authors identify a whole range of different concerns that are negotiated under the heading of ‘data ownership’. Besides a systematization of various connotations and understandings, the paper develops a constructive interpretative proposal: calls for data ownership are charitably understood as attempts to call for the redistribution of material resources and the socio-cultural recognition of data subjects. The article is freely accessible.

New publication: “Primer on an Ethics of AI-based Decision Support Systems in the Clinic”

A first vALID publication has appeared in the Journal of Medical Ethics. In their “Primer on an Ethics of AI-based Decision Support Systems in the Clinic”, Matthias Braun, Patrik Hummel, Susanne Beck and Peter Dabrock describe ethical and legal challenges of AI-driven clinical decision making. They also formulate first suggestions on how the notion of “meaningful human control” could be understood in such contexts. Besides the article, the authors have published an entry in the blog of the Journal of Medical Ethics. Both the article and the blog entry are freely accessible. 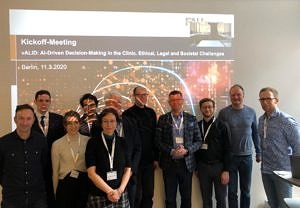 The kick-off meeting of vALID took place in Berlin on March 11. Besides organisational issues/matters, the meeting already focused on initial questions of content that the project team will address over the next three years: which actors are involved in the clinical decision-making process and how, if AI is the third party besides physician and patient? Who is responsible for errors? What would it mean to make the black box AI in the clinic transparent for users and patients/parties concerned? How could the ideal of trustworthy AI in the clinic be fulfilled in these contexts? To answer these questions, first hypotheses and working steps/stages were defined. The project team looks forward to keeping you informed about developments in vALID on these pages.

Press release on the vALID project

In a press release, the Friedrich-Alexander-University Erlangen-Nuremberg informs about the new interdisciplinary research project vALID, which investigates ethical and legal challenges in the use of artificial intelligence in clinical decision making.